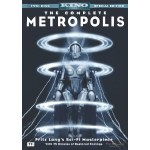 A lot of us dabble in photo restoration. You know, scanning in those old photos from when we were kids, cleaning up scratches, correcting faded color, and all the rest. I’m about to embark on a major project, scanning in family photos taken with a Sawyer 35 mm ViewMaster camera in 1962, then mounted in those crazy ViewMaster reels. Each photo is less than one-quarter of a standard 35 mm slide. I have over 400. Yep, major, major project, but the majority of the photos are of family members in Italy that need to be preserved for the rest of my family.

If you are at all interested in photo/movie restoration, you need to see the latest release of the classic silent sci-fi masterpiece, Fritz Lang’s Metropolis, recently released on DVD and Blu-Ray by Kino International. Thanks to a great find in Buenos Aires, 25 minutes that was lost to censors and American distributors has been restored to the film. Yes, at 148 minutes, it’s long, but worth watching if you are any kind of silent film fan.

If you don’t want to sit through the film, at least watch the 2nd DVD in the set. Unfortunately, NetFlix only has the first disk available, so check your local library if you don’t want to buy the set. It’s a real pity, as the second disk contains a 50-minute documentary, “Voyage to Metropolis,” on the making and restoration of the film. The found footage came from a copy of the original German print (before it was cut to pieces). The copy, because of the danger of storing old nitrate prints was transferred to 16 mm negative film in the early 1970’s, and unfortunately, it was done as cheaply as possible, without even cleaning the film first. Parts of the film restored from this old negative print are very apparent due to the lack of quality, but at least they are there. I found the story of the restoration fascinating and a tribute to our current technology. This latest restoration took nearly a year and cost $800,000.

And if some of the footage of Metropolis looks familiar to you, check out the Queen video, Radio GaGa.

One Response to Restoring Metropolis