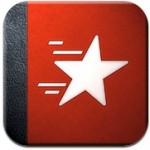 I was reading the latest news from TidBits (you do subscribe to their RSS feed, don’t you?) and spotted a mini review by Adam Engst on an iPad app called Projectbook: Notes and To-dos. It’s iPad only, at the moment ($1.99), but versions are promised for iPhone and Mac.

Now, we all know that there are a bazillion note taking apps out there, but this one is different in that you can use your on-board camera to take photos to embed in the your notes and record commentary at the same time. Imagine attending a lecture, recording the audio, taking notes, and taking photos all without leaving the app. Like many others, it will sync with your iCloud account. It’s not perfect. One glaring omission is an eraser tool. There is an undo command, but if you go to a different note, then go back, you have no way to get rid of a single sketch line. You can delete all sketch lines or all typewritten text or all photos, but there is no way to erase a single drawn line that I could find. I did send a request to tech support. Still, it’s an app that shows much promise.

I’m really looking forward to the release of the Mac version. This may be the replacement that I’ve wanted for Evernote . I frequently grab text and graphics from various sources, but with Evernote, all of your data is stored on their server unless you opt for a paid account. No internet connection, no notes. Now I wouldn’t mind paying a fee to have my notes backed up on their servers if it was an option, but these are my notes, and I really want them on my computer. I’ll see to my own backup. When Evernote launched, all data was kept on your computer or iPad or iPhone. I think it changed (without notice) when Evernote 2 was released. Not nice, people.

Rather than trying to cover all that Projectbook does in this article, go to their website and check it out. It’s a work in progress, but it shows a lot of promise. 4 Responses to Projectbook: Notes and To-dos