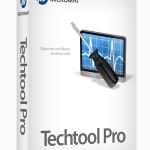 While Apple’s Disk Utility can handle some disk corruption problems, I tend to fall back on two commercial apps, Disk Warrior and Micromat’s TechTool Pro. It has been nearly two years since any updates were released for Disk Warrior. Micromat released TechTool Pro 7 in June of this year. Cost — $99.99, but if you have a previous version you can update for $39.99. All you need is your serial number.

TechTool Pro is already running with developer versions of the coming Mavericks operating system. No word yet on when Disk Warrior will be ready. I can only speak for myself, but I like to have diagnostic/repair software handy before doing any upgrades/updates. In addition to a current backup. Paranoid? Who, me? The one backup you really need is the one you won’t have. (Subset of Murphy’s Law.) The recovery program will be the one you put off buying. (Ditto.) The way I look at it, if I never need it, it’s cheap insurance. TTP has added some nice features. One of the biggies is the Emergency Startup Disk. Yes, if your OS was installed properly you have the hidden Recovery HD, but  Micromat’s eDrive does more if your boot drive goes missing. It has TechTool Pro already installed ready to run, and you can even add other programs. Install the Protection system preference and have it monitor your system in the background. There is plenty of information on all the functions of TTP on Micromat’s website. Take a look. TechTool Pro has been around for a couple of decades. It’s lasted this long because it does what it promises.