Where’d I Put Those Keys? (Call Your Tile!) Oh, Those Sticky Hard Drives 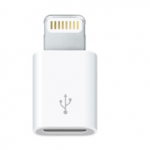 Making the switch to iPhone 5 (then iPhone 5s) and iPad Air meant replacing all my 30 pin cables with Lightning cables. The problem is that Apple only makes two Lightning cables one 1m ($19) and the other one 2m ($29). They do make a relatively expensive 30 pin to Lightning Adapter ($29), but I’d rather not have to buy those adapters for all my existing cables. This meant buying 3rd party Lightning cables if I wanted something longer than 2m or shorter than 1m. I’ve had the best luck with the 10 foot cables from Monoprice.com. However, the problem is that over time the Lightning connector on the end becomes loose from the cable and you begin to see wires. This will happen even quicker if you disconnect it from your iDevices by pulling on the cable rather than the connector itself. I’ve tried cheaper cables from various manufacturers (most likely made in China) and the problem with these is that they simply stop working after a month or so. The first thing that happens is the connector stops working on one side. Meaning that you have to plug it in one way vs being able to plug it in on either orientation. Then eventually the cable stops working period.

Apple makes another less expensive Lightning Adapter that connects to a standard Micro USB cable. It’s easy to find quality long USB cables since they’ve been making them for years. This means that I can buy relatively low cost Micro USB cables at any length I want and put a Lightning Adapter on them. For example, here’s a 10 foot USB cable from Monoprice.com for only $1.56! Add the Apple Lightning to Micro USB Adapter for only $11.56 from Amazon.com ($19 list price), and you’ve got a 10 foot Lightning cable for less than the price of the 2m (about 6 feet) Lightning Cable from Apple. The other advantage to this solution besides having Lightning cables at relatively any length you want (because you can pretty much get Micro USB cables at any length you want) is that if you take the adapter off you can charge most other mobile devices. I use a shorter version of this in my car so that if the passenger has an iPhone I can off them a charge, but if they have an Android or any other smartphone I can pop off the adapter and use the same cable.