Which Media Streamer? Amazon Is At It Again

A Stand for My MacBook Pro 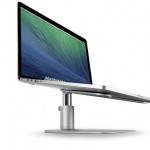 If the saying that “A clean desk is the sign of a sick mind” is true, then I must have the healthiest purest mind on the planet. My desk is rarely ever “clean.” When I’m working at my desk I’m working on a MacBook Pro connected to a Wacom Cintiq 24 HD display/tablet. I love this setup. Up until recently I was running my MacBook Pro “lid closed” and simply using the one big display on the Cintiq for everything. Although I knew my MacBook Pro could support multiple monitors and an extended desktop, I just never did it. That was until I spent some time at my friend’s desk and she does graphic design. She swears by her 3 monitor setup. One is a 27″ iMac with two Dell monitors, one on each side. It’s so much nicer having that much screen real estate and being able to look at 3 different applications at the same time. When I got home I opened the lid! This was great, but now I needed a different stand. The stand I had before was designed to stand the MacBook Pro up while closed. Now I needed a stand that would lift the MacBook Pro up while open so that it was at a more comfortable viewing height. After some looking around I went with the Twelve South HiRise for MacBook. This stand did exactly what I wanted with an adjustable height to boot!. It’s sturdy and doesn’t feel like it’s going to tip over. It angles down the keyboard a bit so that you can still type on it if you need to. It has non-skid rubber on it so the MacBook doesn’t move. It was just what I needed. It wasn’t until I started writing this review that I realized that both my new HiRise stand and my former BookArc stand were both designed by the same company, Twelve South. Clearly I like their products because I bought them based on their design and the problem they solved without thinking about the brand.

3 Responses to A Stand for My MacBook Pro