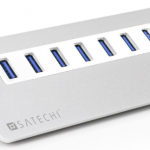 I needed wanted a new USB port. The Belkin unit that I had, and most of the ones I came across had ports on all sides of the unit, basically looking like an octopus by the time I was done plugging into the ports. While this served the purpose, and was acceptable years back when I first purchased the hub, now functionality was trumping form.

I’d restructured my work area, and was now looking for a hub with ports only on one side. So, I was now on the web hunting for a multi-USB port that would work for me.

I ended up choosing the Satechi 7 Port USB 3.0 Premium Hub because it best fit the criteria for what I needed the USB hub to do.

1. Ports only on one side

2. Ports positioned at a slight angle

4. Matches other accessories it’s placed near, pleasing to the eye, 🙂 .

Some reviewers recommend the hub high, but felt it awkward that the power port and computer connection of the hub were on opposites ends on the unit. For me this was a non-issue. But, there are similar hubs out there with the power/adapter connections at the back of the unit.

I’d also thought of purchasing this same brand in the 10 port version, where three of the ports could power items like an iPad. But, at the time, the reviews on the 10 port model weren’t as favorable. The 7-port model was very highly recommended.

I’ve had the Satechi 7-port hub for a few months now and it has performed perfectly for me.

The hub is available at Amazon and MicroCenter for around $54.